G2G3 is a division of Capita. Its specialisation is running simulations of I.T. involvement in business change, in a educational format, to prepare corporate staff for the procedural and cultural shifts that will be required during transformation. I was invited to take a free place on their DevOps simulation. I wasn’t paid to attend, nor for this blog; nevertheless, I’ll state now that I believe everbody in I.T. who can, should go through this challenging and renewing experience.

The scenario was that we were part of a business that was converting its I.T. from being purely internal and administrative, to also providing external services to the company’s customers. The script dictated that a lot was riding on this. The cost of the consequent systems development was being taken into account, as well as the return on that investment and the revenue it enabled. As scenarios go, this one was as real as it gets. Our actions during the simulation would be monitored by an automated Controller, a purpose-built application that would simultaneously play the roles of the spur from the market and the company’s internal users; while also calculating the financial results of our performance as the simulation progressed. 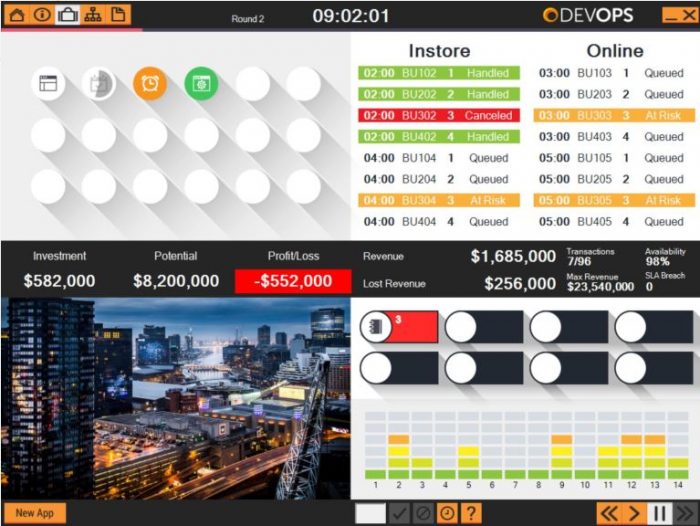 Big Brother is Watching You

Alongside G2G3’s numerous, helpful stewards and workshop leaders, there were some twenty-odd of us on the day. After coffee and pastries, we were divided into groups to represent the key players in the game. These included the Business itself, including the product owners of the applications to be commissioned. There were Developers who would produce those applications. Their output would go to a Test department, and from there to Operations, where an appropriate hosting server would be selected and the installation made. Then there was the Service Desk, which would react to incoming user enquiries, escalating those it could not resolve to Operations. All this was to be managed by well-crafted instructional booklets, lookup tables, ancillary documents and surprise insertions. There were interactive whiteboards everywhere, which would later come in for heavy use by the players.

We were given a presentation of the scenario, plus a few minutes to review the documentation and soak up the anticipative atmosphere. Meanwhile, the controlling application glared down on us from the main screen, like a cross between a steaming, launch-readied Saturn V and the furrowed brow of an expectant Big Brother. The Controller sounded a klaxon – and off we went.

We had to get from a position of not knowing what we were doing nor what to expect, to one of patterns identified and processes in place, very quickly indeed. The workshop itself did not instruct us to do this – rather it emerged from the attendees’ gathered expertise, professionalism, and will to succeed. The pace was frantic, and it was clear that every group was under the same pressure and enjoying it. Every support call we fixed, every application submitted for test, every system installed, and business problem resolved was reported to the G2G3 workshop leaders, and onward to the Controller, which then showed us the commercial consequences. The camaradie began to build – it was us against the Controller.

Too soon, the first phase came to an end and the Controller showed us how we had fared. Led by the simulation’s author, there followed extensive analysis of what had happened and its implications, what we had learned, and what we might do differently. I’ll not share those discussions here, because that would be a spoiler; and going through the exercise is a far more powerful learning experience than simply reading about it.

Then we were given additional information, leading to new prompts and circumstances. The klaxon sounded again, and Chapter Two began. This pattern would be followed once more, for a total of three chapters. And throughout, lessons learned were being converted into measurable performance improvements in real time.

For me, a core point of the exercise hit home when mid-afternoon, someone from the Business group turned up in Operations with a particularly cogent enquiry. They had somehow noticed that one of our servers was erratically problematical. “Tell me about it”, was the table’s unspoken chorus. But this lesser-spotted business creature was not here to whinge at I.T., but actually wanted to see how the business could help in resolving this now shared difficulty.

That incident was not isolated. This was happening across the room. Nor was it just about increased co-operation between Development and Operations, as is sometimes erroneously assumed to be the point of DevOps. It was more than that. Silos were beginning to break down. Departments were talking to each other, sharing responsibilties. Flows were being smoothed. Mutuality began to pervade. And operationally, whole sections were finding themselves with less to do, briefly pondering their imminent redundancy before realising that their skills might be usefully deployed elsewhere, to increase overall productivity still further.

The Servicedesk’s contribution was being recognised, all technocratic prejudices being ditched. But deeper; imagine if you will, hardened, semi-coloned code-cutters and erstwhile rackmounted, LED-watchers groping to perceive “The Business” in suddenly dawning, hallowed recognition. The transformation taking place here was not just to the customer-facing I.T., but to the culture of those who make that happen.

If I have a misgiving, it is that none of us could go through all the experiences of the members of other groups. In that respect, the immersion was limited, and we had to rely on the comments of our colleagues during the analysis sessions for some vicarious learning. Also, the time felt somewhat short – the few hours flew past, and perhaps a longer workshop, a second day perhaps, might be better. But omnipresence is not an I.T skill – we have to put up with not experiencing everything at first hand. And yet, this does not detract from the value the workshop delivered.

Whether or not your business is digitalizing, or your development is switching from Waterfall to Agile, or your Servicedesk is automating; there is something in this workshop for every I.T. department. In my view, everybody in this industry who can, should go through this. There is so much to learn, and it is so relevant to our emerging world. The silos have had their day, technocracy is being diluted into commodity, the cliché of the ‘fast-changing business’ has finally come to reality, and the Millennials will no longer put up with our engineering-era technology obsessions and leaden bureaucracy. The world is changing around us and we have to stay relevant. The G2G3 DevOps simulation is not just informative, it is uncannily timely. https://g2g3.com/index.html

Let us notify you of updates

By continuing to use the site, you agree to the use of cookies. more information